, a MS star can cross the horizon without disruption. Such tidal disruptions are of great interest in the dynamics of galactic nuclei.
Tidal disruptions at a rate of order 1e-4 per year and per galactic nucleus seem unavoidable, with the likely consequence of bringing back to active life an otherwise quiescent galactic nucleus (Phinney 1989, Sembay & West 1993, Magorrian & Tremaine 1999, Syer & Ulmer 1999). Some flaring events in the UV or X-ray band from the center of active and non-active galaxies have been tentatively interpreted as the accretional aftermath of tidal disruptions (Li, Narayan & Menou 2002, Komossa 2002).
Tidal disruptions may also contribute to the feeding of the central BH in active galactic nuclei (Young, Shields & Wheeler 1977, McMillan, Lightman & Cohn 1981, Duncan & Shapiro 1983, Durisen & Cohn 1987a,1987b,Murphy, Cohn & Durisen 1991, Freitag & Benz 2002). The following figure is from Fulbright’s thesis. 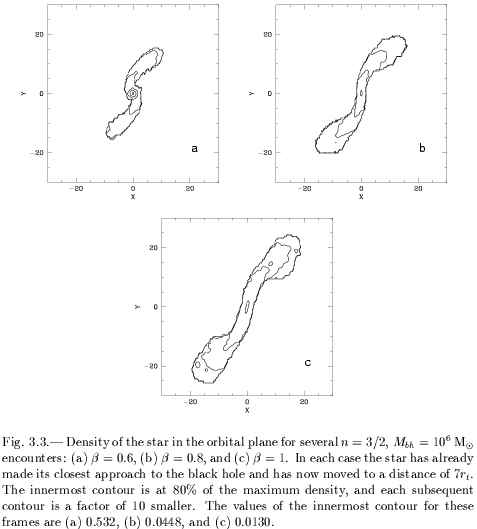 The process of tidal disruption and the ensuing evolution of the gas stream has be the subject of many simulations, realized with the SPH scheme, grid hydrodynamics or simplified 1-D methods that treat the deformed star as a set of ellipsoids. Here is an incomplete list of these works:

A coherent picture of the tidal disruption itself (at first pericentre passage) emerges from these works. However, a comprehensive set of simulations, using realistic models (instead of polytropes) for MS and Giant stars, and considering various rotation parameters for the BH and various orbits in a Kerr potential, is still lacking. Also the question of the possibility of thermonuclear detonation of the star remains to be elucidated.
Furthermore, the evolution of the liberated gas is a very intricate problem, still poorly understood. About one half of the stellar gas is left bound to the BH. After one orbit, the leading tip of the bound gas stream will collide with the trailing part (Kochanek 1994, Lee, Kang & Ryu 1996, Lee & Kim 1996, Kim, Park & Lee 1999, Ayal, Livio & Piran 2000). An accretion disk or a spherical gaseous envelope will forme around the BH (Cannizzo, Lee & Goodman 1990, Loeb & Ulmer 1997, Ulmer, Paczynski & Goodman 1998, Ulmer 1999, Menou & Quataert 2001). Obviously, a better understanding of the post-disruption accretion process in order to predict its observational signature (wavelength, intensity, duration, etc.). Watch for the work of Tamara Bogdanovic in this field (Bogdanovic et al. 2004).
The prompt X-ray and gravitational wave emission at the moment of tidal disruption (firt pericenter pasage) have been considered by Kobayashi et al. (2004).
Also some more comprehensive set of simulations, using realistic models (instead of polytropes) for MS and Giant stars would be very welcome.

Even if a star does not penetrate deep enough into the BH’s potential to be completely disrupted, it may be perturbed by the tidal field in such a way as to present tell-tale observational features. Such possibilities have been addressed in the following works:

Here, computations of the stellar evolution of tidally perturbed stars are clearly called for. Unfortunately, the problem is compounded with the further orbital evolution of the star and its subsequent tidal interactions with the BH. It can thus be considered as an extreme case of binary evolution problem (See Modest working group 2).