On Oct 2020 the physics Nobel prize was awarded to Roger Penrose, Reinhard Genzel and Andrea Ghez “for the discovery of a supermassive compact object at the centre of our galaxy”. I was happy, first because I know them personally and their work and this was (more than) very well earned!

But also I was happy to see that they wrote “compact object” and not black hole, because we’re not there yet. I guess we will have to wait for LISA.

In any case, in the document of the Swedish Academy of Science in which they explained the science that Roger, Reinhard and Andrea have done, there was one figure which bothered me a bit. I made a kind of quiz in the mailing list of the institute that I am currently visiting and this triggered a long exchange of e-mails.

I discussed also with my friends and colleagues Leor Barack and Carlos Sopuerta and they agreed that the figure is misleading. I also posted something on facebook and got some emails. Finally, I ended up writing a long email and decided to put it here as a summary (which profits from the comments of Leor and Carlos) instead of replying to each individual email.

In any case, this is the figure 1 from the document cited above. 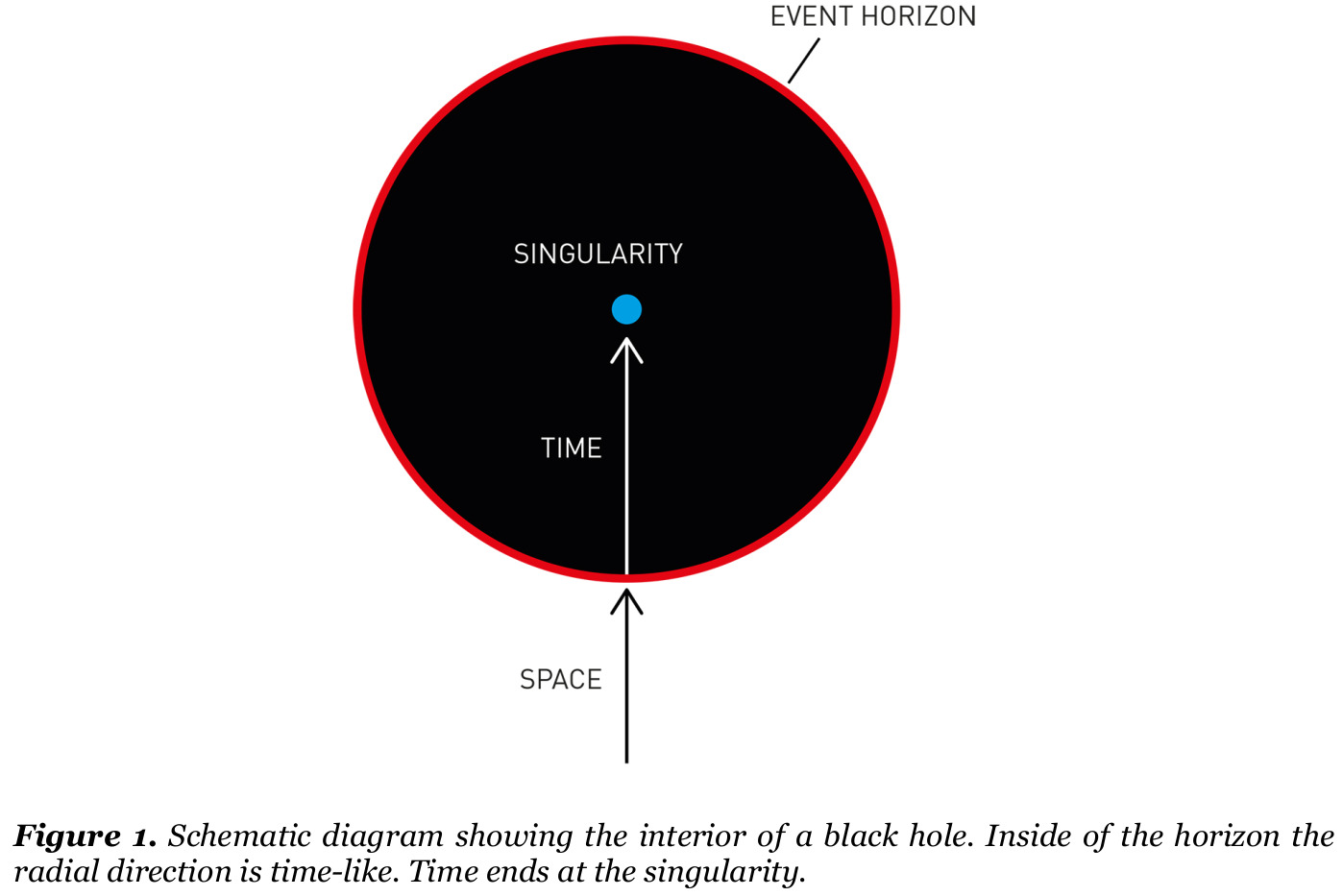 The depiction of a black hole as a circle with a dot in the center representing the singularity is very misleading.

It’s misleading because it does not reflect the true symmetries of the interior.

The picture makes it seem that the interior is static and spherically symmetric, which it is not. Surfaces with r=constant in the interior are not spheres but homogeneous 3d hypersurfaces.

The singularity is not a physical place or position that you can pinpoint with a dot.It is the future boundary of the BH’s interior. It is what will happen in the future, such as the postulated “big crunch” of the Universe or, going backwards, the big bang in our past.

It is something that will happen to you if you fall into the black hole, in your future, when you follow your geodesic (and by the way you’d rather not move much or fight it, because you would only accelerate the process that will lead to your death). Curvature will increase as a function of time around you until you reach the singularity in your future. And at that point GR breaks down – the theory is as elegant as to precisely tell you where exactly it does not hold anymore.

To their defense, in that figure they do say the arrow represent time in the interior but the problem is that the drawing conveys the impression that time is two-dimensional.

I think they meant that the radial dimension is time, which is OK. The angular dimension would represent space, supposedly – but, again, that’s misleading because the interior is not spherically symmetric.

The caption says that it shows the “interior of a black hole”, but it is also showing the exterior, and this is misleading for the reader.

The same way in which points in the Penrose diagrams represent two-spheres, this point could represent three-dimensional space. And that would in principle be fine. They do indeed add the label “time” to the arrow and then they try to indicate that after crossing the event horizon there’s just time.

But outside of the sphere you have a two-dimensional representation of the exterior, where there is no time, only space. Per se that’s fine because spacetime there is static and hence we do not need the time direction, but inside the event horizon it is not static.

By writing “time” you imply that the two dimensions become one, time, which is not right. That’s the whole point of using Penrose diagrams, after all.

Bottom line: Do not draw circles with a dot in the centre to represent black holes and their singularities. Use a Penrose diagram.

I found it strange not to use a Penrose diagram to explain a black hole interior in the document of the Nobel committee, even when you’re awarding a Nobel Prize to Penrose for his diagrams to explain them!