Two classes of methods have been developed that aim at ‘guessing’ the result of a stellar collision without resorting to an explicit hydrodynamical simulation. So far they have been applied only for MS–MS collisions.

The hope is to get a semi-analytical method to get detailed prediction about the outcome of collisions (masses, velocities and stellar structure(s)) with only a tiny fraction of the computational burden of full-fledged hydrodynamical simulations. Indeed, even with a relatively low resolution (of order 10000 particles), an SPH simulation requires at least a few hours of CPU time on a standard PC. It is thus clear that incorporating ‘live’ hydrodynamics into stellar dynamical simulation is still not an option, except maybe for the slowest stellar dynamics schemes (i.e. direct N-body) and for clusters in which collisions are rare.

In a pioneering work about the collisional dynamics of dense proto-galactic nuclei, Spitzer & Saslaw (1966) introduced a simple, semi-analytical model to determine the outcome (mass and energy loss) of high speed stellar collisions. This approach has been applied by David, Durisen & Cohn (1987a,1987b) and extended to unequal mass collisions by  Sanders (1970) and by Murphy, Cohn & Durisen (1991). 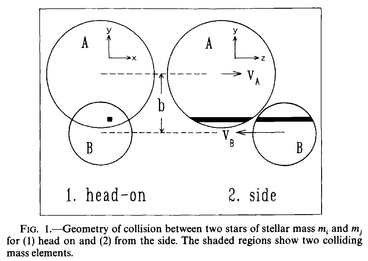 The computation preceeds as follows. The colliding stars are decomposed into a lrage number of sticks, parallel to the direction of the relative motion. It is assumed that, from the time of first contact, the collision proceeds on a straight trajectory. In the overlapping regions of the stars, one considers conservation of momentum and energy (including thermal energy) in individual encounters between one stick from the fisrt star and one stick from the other (in black on the figure). No transverse energy or momentum transfer is taken into account.  If,  after the collision, the total specific energy of a stick  relative to its parent star is higher than the binding energy, G*M_star/R_star, this element of mass is considered lost from the parent star (of mass M_star and radius R_star).

Although quite crude, this model gives results for the mass lost in surprisingly good agreement with SPH simulations when the relative velocity at infinity is larger than the stellar escape velocity and the impact parameter is relatively large, d_min>0.4*(R_1+R_2). 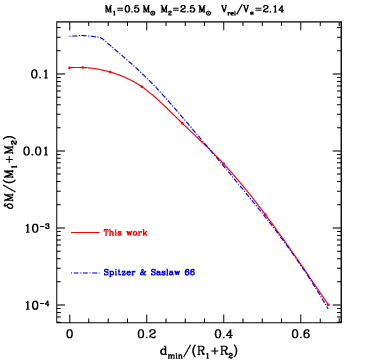 This regime corresponds to most likely collisions in the centre-most parts of a galactic nucleus where a central massive black hole imposes high velocities. Future work, in particular detailed comparisons with  hydrodynamical simulations, will tell us if it can be used to determine the entropy of gas elements in order to predict the post-collisional stellar structure, in conjonction with some fluid sorting algorithm, and if an extension of this method can be devised for the regime of intermediate velocities (V_rel of order of V_star) and/or small impact parameters.

If the relative velocity at infinity, V_rel, is lower than the stellar escape velocity, V_star (of order 500-1000 km/s), which is the case for collisions happening in open or globular clusters, the relative velocity at contact is similar to the thermal velocity of stellar matter. Hence, such collisions are only mildly supersonic and entropy is nearly conserved. Consequently, the structure of the merger can be established by sorting the mass elements from the parent stars according to their entropy, as demonstrated by Lombardi and his collaborators (Lombardi et. al. 2002).

Make Me A Star (MMAS) is a freeely available software package that quickly generates collision product models for such scenarios. MMAS implements fast fluid-sorting algorithms to treat nearly parabolic encounters between low-mass main sequence stars, including an approximate treatment of mass loss and shock heating. This software is intended to be used in combination with realistic dynamical simulations of star clusters. MMAS is currently being implemented as the hydrodynamics module of two on-line programs that unite stellar dynamics, hydrodynamics and evolution:

Smoothed Particle Hydrodynamics is a Lagrangian particle-based method that has been widely used to tackle all kinds of astrophysical problems, from planetesimal fragmentation to cosmological structure formation. For a description of the method and of its achievements, we refer to reviews by Benz (1990), Monaghan (1992,1999,2001) or Rasio (1999). Peter J. Cossins has written a chapter of his thesis reviewing the subject (2010). For a minimalist introduction to SPH, taken from Freitag (2000), follow this link.SPH simulations of stellar collisionsSPH codes do not impose any restriction on the geometry of the problem, are best suited for highly dynamical situations (rather than quasi-hydrostatic ones), adapt naturally to a wide range of spatial scales and don’t waste computational resources on void spaces. For all these reasons, SPH is particularly well suited to the simulation of stellar collisions. And indeed, most investigations in that field were done using SPH, as this (incomplete) list of SPH collision simulation papers testifies:

The SPH method was invented in 1977 independently by Gingold & Monaghan and Lucy to study the fission of rotating (proto)stars. In 1979, it was applied to investigate the disruption of a star due to the tidal pull of a companion (Gingold & Monaghan 1979). SPH simulations of collisions between interstellar gas clouds were done in 1985 by Lattanzio et al. and, in 1986 Benz et al. considered the collision between the proto-earth and a large object to explain the origin of the moon. The first published SPH simulations of stellar collisions are the ones by Benz & Hills (1987). The field has since grown to a small industry and keeping track of all publications is difficult.

Here is an incomplete list, organized by collision type. In this table q stands for the mass ratio M_2/M_1; other quantities are defined here.

See also the reference list for collision simulations with grid methods, below in this page. 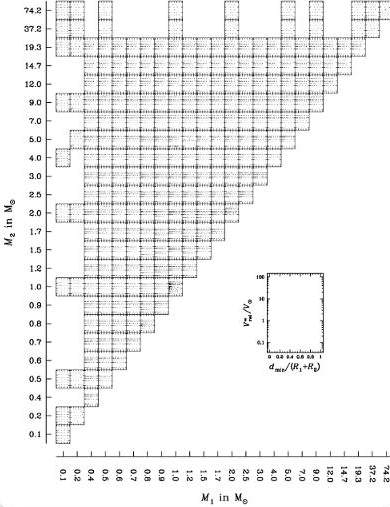 I have put together the files describing the initial condition and outcome of some 15,000 SPH simulations of MS-MS collisions (see Freitag & Benz 2005 and the on-line complements, a 5.2M pdf).

Only simulations included in summary.txt have passed all our tests to sort out “bad” results (poor conservation of energy or angular momentum….) and select the highest resolution simulation when a collision has been simulated with various particle numbers.

These (145 kB) are the initial conditions for all simulations (to be used together with stars.txt to get the stellar masses).

Here you will find the basic information about stellar models (mass and radius) and name of correspond file for internal structure.

The files containing the internal structure of stars can be found here. If you use any of those (except the simple polytrope models), please cite Schaller et al. (1992) , Meynet al al. (1994), Charbonnel et al. (1999).

In this file you have the results in “raw” form: masses, positions and velocities of the star(s) at the end of the collision simulation.

And, to finish with, here you will find a summary of initial conditions and outcomes for all collision simulations.

Based on the former set of 15000 simulations 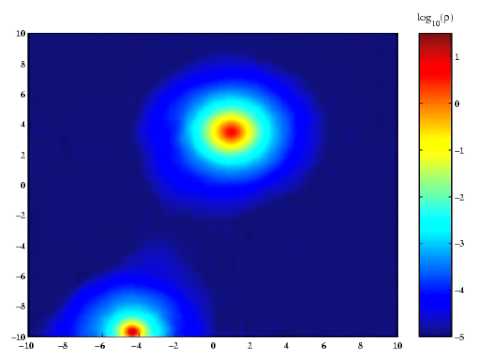 SPH in astrophysics is alive and well! I have created a direct (tiny) link to the most recent papers on SPH:

Unfortunately, most web sites concerned with SPH seem to be a bit out-dated, with a lot of dead links. Here is an exception found so far: The on-line course on computational physics, by Franz Vesely, at the University of Vienna, features a chapter on SPH. Unfortunately the chapter seems to have broken images.

Not much here for the time being, except an (incomplete) list of papers on collision simulations with grid methods.

The very first simulations of stellar collisions known to us were carried out with low dimension grid codes. To increase the symmetry and decrease the effective dimensionality of the problem, head-on collision between identical MS stars where considered, quite an physically unlikely configuration (Mathis 1967, DeYoung 1968, Seidl & Cameron 1972). Since then, no grid simulation of MS-MS collision has been realized, an unfortunate fact, as this would allow useful comparison with the (quicker) SPH simulations. Most teams have concentrated on collisions involving compact objects.

Here is an incomplete list of grid-based simulations, organized by collision type. In this table q stands for the mass ratio M_2/M_1; other quantities are defined here.

See also the reference list for collision simulations in this same page.

Any help to develop this section very welcome…Visit also the page about NS-NS coalescence by Max Ruffert, with nice images and animations.

To get an idea about the activities and issues about collisions in cluster dynamics between 2003 and 2004, see the slides presented during the Modest-4 held in Geneva in Jan 2004 for this working group (coll_report_marc_freitag.pdf).

You may also have a look at the list of collision-related topics discussed during this meeting (coll_discussion_modest4.pdf).